Robots and Autism: Could Robots Eliminate Surgical and Medical Treatment? 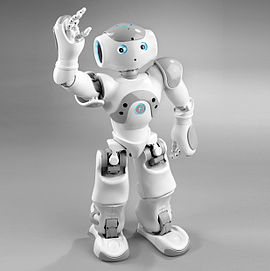 Robots and Autism. Medical robots have been used to aid doctors and surgeons perform many procedures easier, faster, and more acute precision. A more recent medical breakthrough has allowed a therapist to train kids with autism to learn social skills with the help of robots.

The humanoid robot NAO (pronounced as “now”) is developed with an elaborate system of cameras, sensors and computers designed to help children learn how to coordinate their attention with other people and objects. Using the methods and principles of joint attention, Professionals are using the NAO robot to help children diagnosed with autism spectrum disorder (ASD) or ASD-like symptoms to gain social skills.

The researchers revealed that children diagnosed with ASD or ASD-like symptoms paid more attention and followed its instructions compared to as they did with human therapists. This result was published in the March issue of the publication IEEE Transactions on Neural Systems and Rehabilitation Engineering.

According to Julie Crittendon, assistant professor of pediatrics at the Vanderbilt University Medical Center, “The children’s engagement with the robot was excellent, and we saw improvements across the board in both groups.”

The researchers created an “intelligent environment” for now to teach the kids effectively. NAO is set up on a table in front of the room and the child sits on a chair eye-level to NAO. The room is equipped with different cameras focused on the child’s position in order to track his or her head movements, thus, ensuring whether or not he or she is paying attention. If those kids were like the ones in my grade school, few would have been paying attention without the robot.

NAO was programmed to have prompts that can trigger reactions from children. These prompts include “look over here” and “let’s do some more.” These verbal prompts are accompanied by gestures that can also elicit responses from children, gestures like pointing at a certain direction or object in the room. NAO also responds to successful prompts followed by the child, with a commendation like “good job.”

Now, one size does not fit all. To be useful, the system must be adaptive.” To fit this criterion, NAO can also automatically adapt its behavior to every child depending on his or her responses to NAO’s prompts. This is to ensure that NAO can meet the individual needs of every child being mentored. Perhaps some kids are just different than others and need a bit more time to grow up.

During the Carnegie Mellon’s “Robot Hall of Fame” competition last year, NAO was named as the best robot for education. With this, Warren also expressed his hope that NAO will be the “accelerant technology” that will help children with ASD or ASD-like symptoms learn the social skills they need.

Robots and Autism? This new breakthrough in robotics has become one of the cornerstones for the development of non-surgical, non-drug therapy. Or perhaps it's not the robot, perhaps for many children ASD is actually a symptom of a boring, lifeless teacher droning on about boring subjects. One wonders what percentage of kids respond to such treatment. If that number is high enough we may find that perhaps, for many kids, ASD is not a disease after all. And if that is true, than this article cannot be named "Robots and Autism", but "Robots Helping Children to do Better in Life".