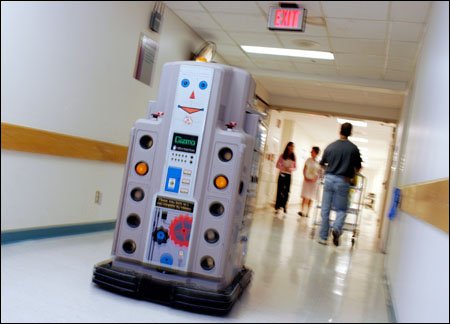 Robots after surgery? A Boston, Mass. hospital introduces a sci-fi worthy caregiver system, where patients can go home and stay monitored by robots after surgery. That may sound like a scenario dreamed up by Asimov or Heinlein, but it's no longer science fiction. It's a scientific fact — at least at the Children’s Hospital Boston, a pediatric teaching hospital affiliated with Harvard Medical School.

The Children’s Hospital in Boston has been sending post-surgical child patients home along with robots that will watch over them through their recovery period.

Each robot is equipped with teleconferencing capabilities to allow them to relay information about the patients, to their doctors. A monitoring robot can move around on two wheels and make use of built-in cameras, audio equipment, and video screens to perform its duties. A single robot costs around $6,000.

According to Dr. Hiep Nguyen, director of the hospital’s Robotic Surgery Research and Training Center, the goal of their pilot program is to reduce the cost of providing post-surgical care while making it easier and more efficient to offer.

Dr. Nguyen notes that the monitoring robot will allow today's doctors to make up for not being able to do house calls anymore. A doctor can now remotely guide the robot by giving it commands over a high-speed 4G connection. The doctor can pilot the wheeled robot around the patient's home and see what its cameras capture. That will allow the doctor to check up on the recovering patient and see if the doctor's instructions are being followed correctly.

The goal of VGO is to allow an employee to maintain a presence from a distant location that he or she would not be able to interact with otherwise.

A VGO robot can display the remote user's face on its LCD screen and broadcast the user's voice through its speakers. The robot is capable of maneuvering in tight spaces and changing its movement speed, from a crawl up to a brisk walking pace. The remote user can see what is happening through the robot's camera, which can also take high-resolution photographs for documentation and detailed examination.

It is easy to see how such a system can be applied to post-surgical care in the home. The remote worker robot allows the patient to feel as if the doctor is actively present in the room, even though they are physically far apart. So patients can feel confident about going home to be monitored by robots after surgery, knowing that their doctors are watching over their recovery.