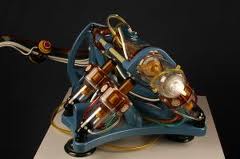 Biopsy Robots. Researchers believe that some routine medical procedures such as breast and prostate biopsies could be performed in the future with minimal human guidance at less cost and greater convenience to patients.

Already, the Johns Hopkins Urology Robotics Lab based in Baltimore, Maryland are working on biopsy robots and have developed a medical robot called the PneuStep that can carry out organ biopsies during an MRI scan. The robot is powered by a motor that uses no metal or electricity, operating only on the intense magnetic fields generated by the Magnetic Resonance Imaging machines. The incredible robot is made of "plastics, ceramics and rubber" and is “driven by light and air,” meaning, a series of pistons and gears controlled by a computer in another room.

Far more precise than the mechanisms employed used to remove tumors, the PneuStep could significantly improve the treatment of prostate cancer, which is apparently almost impossible to spot outside of an MRI machine. Before this, surgeons usually relied on "blind" biopsies when operating on organs like the prostate.

Researchers are positive that soon, unassisted one-stop breast exams and biopsies will be available for women. This means that after woman gets a mammogram and anything suspicious is found, an actual robot could be used to guide a needle to the spot to extract a tissue sample.

Duke University researchers are presently working on biopsy robots that can perform this breast biopsy. So far, the human-assisted experimental robot has successfully demonstrated its abilities, throwing open the doors to robotic uses in the medical field even wider.

Ned Light, an engineer explains in an article by the Duke University Office of News and Communication, “Engineers used a basic tabletop robot with ‘eyes’ that used a 3-D ultrasound technology from Duke. An artificial intelligence program comprising the robot’s ‘brain’ processed the 3-D information and gave the robot tasks to perform. After detecting the ‘lesion’ in a simulated breast, the robot was able to calculate its position and then guide a biopsy to its exact location.”

In the latest experiments, the robot is able to direct a needle on the end of the robotic arm to touch a tiny piece of metal, sized to represent tiny deposits of calcium called microcalcificatons, implanted inside a simulated sponge breast. “These deposits are most of the time benign but can be a precursor to cancer. Once a mammogram and follow-up ultrasound show that the microcalcifications are suspicious, a biopsy is in order,” Light says. With such promising results using only a rudimentary robot and a basic artificial intelligence program, researchers are optimistic that once the robot and its artificial intelligence technology is improved, the reality of robot-assisted biopsies can arrive within five to 10 years.

This is, of course, once again, good news and a profound advancement in the field of medicine. I imagine that just like the da Vinci Surgical System, this robot will be far more precise than an actual surgeon’s hands, or more scientific than basic human judgment. Once these robots can operate independently, or via a remote location, we will see an even greater expansion in the field of medical services, replacing procedures usually done by human practitioners. Yet another reason to stop fearing and start trusting intelligent machines.