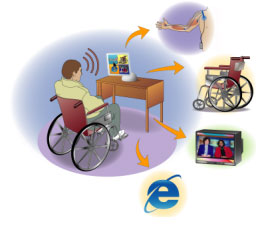 The BrainGate neural interface system is another one-of-a-kind innovation in the medical field. Imagine how difficult it is for a paralyzed person to move and to go about his/ her normal daily routine. What a monumental task it could be for these ones, all the more so, without a hand to render them assistance. But thanks to the BrainGate neural interface system, help is on its way for people suffering from paralysis.

Way back in the 80s and 90s, the thought of a robotic device was once the imagery of science fiction, but not anymore. The BrainGate neural interface system gathers and analyzes the brainwaves of people who are diagnosed as suffering from physical disabilities. What BrainGate does is turns whatever you’re thinking into actions. Indeed, with the BrainGate, there will always be high chances of communicating and interacting with people, thus boosting people’s way of life.

The BrainGate is the first of its kind. It’s been designed to help partially or fully paralyzed individuals to do their daily tasks including using their personal computer, or even switching the rooms lighting and temperature controls.

This system, currently in its clinical trial stage, works in a very state of the art way. But how does it function? A small microchip, four square millimeters, is placed inside the patient’s head, above the brain’s motor cortex. The cortex is the part of the brain controlling the actions of the limbs. That is why even if an individual cannot move his body after becoming paralyzed, his brain could still function in certain ways because it can send neurons thus telling the arms to move. So even if an individual has suffered from a stroke, his brain isn’t totally damaged and he could still function normally. The only difference is that the blockage in the circuits of his body has rendered his back or neck paralyzed.

BrainGate is the product of years of hard work, research, and testing by a team of scientists, experts and researchers coming from such prestigious institutions as Brown, Harvard, Emory, MIT, Columbia, and the University of Utah. BrainGate was indeed conceived as a life-altering facility to breathe new hope to paraplegics, quadriplegics, people suffering from spinal cord injuries, and strokes. It is even foreseen to be a revolutionary facility that will improve how the brain is able to work .

BrainGate, as a state of the art technology, promises so many potentials and opportunities. It is even thought of as a miracle cure that so many people are waiting for. Thanks to its ability to provide therapeutic remedies that up to this point, scientists have long thought were not correctable.