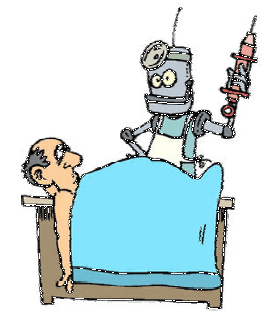 Robotic Syringes. Just the term "robotic syringes" to a non-medical person brings about a mechanical nurse and a hypodermic syringe. Yet, beyond this comical reference there is a serious and fantastic advance in medicine going on today, an advance that could save thousands of lives every year.

Despite the fact that hospitals are institutions known to save lives, it is not unknown that many medical cases concerning human error, especially in the preparation and administering of IV treatments, have caused considerable damage to patients, some even leading to death. The following excerpts describe a typical error that could have been easily avoided if only a more efficient system in was used.

At a Christus Spohn Hospital South in Corpus Christi, Texas, officials reported that up to 17 babies in their intensive care unit were given as much as 100 times the recommended dose of heparin. This is the third time in two years that a hospital has admitted that it administered a wrong dose, resulting in the death of patients. In another incident, a pharmacist at a large community hospital performing the final check failed to notice that the wrong form of amphotericin B had been used to prepare an admixture. This was administered to a patient, who suffered a cardiopulmonary arrest one hour into the infusion and died.

These cases, and many others like it, happened because of a fully manual IV preparation process, one prone to error and vulnerable to contaminants introduced by humans into the sterile process. As grimly illustrated by the examples, errors in the preparation of these IV fluids can be extremely fatal.

An article in a December 15, 2008 issue of the American Journal of Health-System Pharmacy stated that, “Intravenous (i.v.) medication errors are twice as likely to cause harm to patients as medications delivered by other routes of administration (such as tablets or liquids), according to research commissioned by the American Society of Health-System Pharmacists (ASHP).”
It is due to this increasing rate of medication errors and patient fatality that the medical industry has striven to develop a system that would automate the IV process. Using a combination of sophisticated hardware, robotics and software, medical groups like Intelligent Hospital Systems and large corporations like Panasonic have since introduced robotic machines like RIVA, which prepare and administer IV antibiotics in a consistently safe and efficient manner.

These robotic arms have brought on a host of benefits, allowing vast improvement in patient safety, and in the efficiency and effectiveness of pharmacies. The automated system enables compounding of individual patient doses of cytotoxic drugs into diverse container forms like syringes and bags, which is vital to supporting safe and flexible therapy. The device functions much like automated dispensing cabinets, where pharmacists evaluate the order and enter it in to the system. When all the necessary clinical checking is complete, nurses could go to the automated IV preparation robot (AIVPR), and based on patient needs, select the appropriate infusion to be made. The AIVPR would then compound the preparation on the spot.

Intelligent Hospital Sysytem’s Jane Arnot has said that “part of the reason that the RIVA system has been so effective is its flexibility in supporting hospitals' and pharmacies' broad base of drug compounds.” She says that the three RIVA systems in place are “running at least 12 different drug compounds on a regular basis for both patient specific and batch preparations.”

Some other available automated IV preparation robots (AIVPR) include IntelliFill I.V. by ForHealth Technologies, Inc., which assures that the correct drug is quickly and precisely prepared for the correct patient using multiple safety steps. The robot also uses a vision system that captures images of the source vial for each syringe for more comprehensive manual verification.

There is also i.v. STATION by Health Robotics maker of IV Station, designed for patient-specific preparation of injectable drugs within an air-controlled environment. Like the RIVA and Intellifill, its functions include the automatic dosing of medications from their commercial container, the automatic reconstitution of powders within appropriate diluents and the automatic disposal of wastes like empty vials and needles into a dedicated container. Other safety measures for robotic syringes include the verification of correct drug dosage through independent weight control, the use of a unique identification system to avoid accidental exchanging of drugs or final preparation and cross contamination between different drugs.

Since these machines prepare its IV solutions in a closed environment, technicians’ exposure to proven hazardous drugs and chemicals like cytotoxic is also greatly reduced. In terms of capability, such machines are able to prepare between 40 and 60 doses per hour, freeing up technician resources to attend to other responsibilities. It also reduces the amount of wasted IV preparations by allowing hospitals to move from one or two batches per day to 4 or more. This increase means that fewer doses are prepared in advance, many of which are thrown away if the order changes or the patient is discharged. In the long run, these robotic syringes save money and free up manpower.

Because it is fully automated, IV robotic arms could then completely eliminate fatal and common human errors like giving the wrong drug in the wrong concentration. Using state-of-the-art technology like vision systems and advanced robotic software and technology to ensure the IV order is exact, the proper drug is used with the correct source of liquid, the dose is diluted in the right amounts and that everything is correctly labeled. Robotic syringes can be that accurate.

These robotic syringes and IV preparation systems have a great future-a future of preventing deadly errors and saving human life.